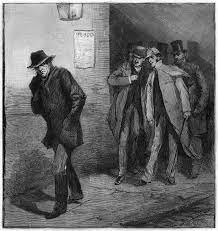 Johannesburg sprung up, as if, overnight. After the discovery of gold in 1886 and the proclamation of public diggings, it was not at all strange to see hundreds of wagons arriving every day. These wagons, in addition to ferrying prospectors, also carried every conceivable object to help make life on this dusty ridge bearable.

The conditions were harsh – in winter, a permanent breeze quickly formed dust storms that made breathing extremely hard, at night is it was icy cold. In summer, the highveld rains turned the town in to a mud bowl and the sun was harsh. To escape the conditions after a day in the claims, in the evening the men frequented saloons to stay warm or enjoy a cool beer, as most did not have proper accommodation, the liquor flowed freely until the diggers stumbled to their tents and foxholes. Only to start the process again tomorrow.

The new arrivals were mostly men, leaving wives and children behind in their country of origin, because conditions were hardly favourable to raise a family and, of course, many of these fortune seekers were young and unattached.

The growth of Johannesburg, most likely took the Zuid-Afrikaanse republic’s government by surprise, as it took only 9 years for 100,000 people to flock to the Witwatersrand. The Zuid-Afrikaanse Republiek Police (referred to as ZARPS) was not up to the task to maintain law and order in the town. They were mostly untrained, unschooled, and only fifty men were sent to the Rand.

This made Johannesburg a fantastic stomping ground for the low-life gangs and criminals. No wonder it was called ‘Duiwelstad.’

Quite a number of hotels, saloons, cafés, and bars popped up. Some owned by law-abiding citizens but mostly by low-life thugs whose really money were made by selling the services of the ladies in the back, by the hour. Seeing that men outnumbered women 3 to 1, this was a roaring trade…

This set the scene for Mr Joseph Silver to arrive in Cape Town, via ship from London. He was quite an accomplished criminal, spending time in New York’s SingSing prison before his stint in London. In fact, he was such an accomplished crook that his name was known across the globe and in far flung places, that he never used his real name (Not that Silver was his real name, but we are using it for now). He never travelled alone, because the type of enterprises he ran, required help from his circle of trust.

Thus, Joe Eligman arrived in Johannesburg in late 1897. He was no stranger to the “pimp” industry and within 130 days he managed to convert a ramshackle prostitution network to a well-organized business with organizational structure as well as the “Bowery” Boys, who provided security for each brothel that paid dividends to Eligman.

He also acquired numerous businesses, all a front for prostitution, but also functioning business that provided a legitimate income. Very soon, the twenty city blocks, known as Frenchfontein (colloquial name due to the number of French ladies in brothels) was under his control.

But the jewel in his criminal crown was the American club in Anderson Street. (Close to Standard Bank today)

Joe was not a man you wanted to cross; he was prone to extremely violent outbursts using anything at hand to inflict injury on the person at which he was raging. Killing was not a problem for him.

He had a bitter resentment towards women and had no problem raping girls in Poland, making them dependent on him by providing drugs and them shipping them to his business in Johannesburg.

A sleezy guy of note.

A stroke of luck

The laws in the ZAR pertaining to prostitution was very vague in the early days, so it was rather easy to NOT get caught but, of course, Joe had ladies “managing” his establishment, they were responsible for collecting fees making it hard to connect him to the brothels.

Jan Smuts, the newly appointed state attorney wanted to get rid of the riff raff in Johannesburg. He proposed new amendments to the current laws pertaining to prostitution. It was no longer legal to ask money to sell your body, to own a property that used as a brothel or to keep woman at your premises against their will.

Now, a criminal thug like Joe could not evade the police for ever.

Joe was eventually arrested and after a lengthy trial he was found guilty of racketeering, owning properties used for brothels and keeping ladies against their will.

This could have been a nice end to this story – the criminal safely behind bars in the Old Fort.

But by a sheer stroke of luck the 2nd Anglo Boer war erupted. Prisoners in the Fort were shipped out to Potchefstroom because all available warders were needed in the war effort.

He escaped from the Potchefstroom jail and was captured on the same day. The devil had extreme luck on his side, because 8 days after his escape attempt, all prisoners were freed unconditionally.

Knowing the Rand was too hot for him, he causally got on a train and went to Kimberley.