Having a library of pictures of the building, I love posting photos of it!

Every time I walk up Simmonds street, to turn right onto Commissioner, I marvel at it. Not only does the building represent the extravagance of early Johannesburg, but also part of the regeneration that is currently happening in town.

Let’s delve a little into the fascinating history of the building.

The story of Corner House is intertwined with the story of a certain Mr. H Eckstein (read more about him in the next post)

In its current incarnation, The Corner House, was completed in 1903. It is the third building erected on the corner of Simmonds and Commissioner streets. Both previous buildings on the stand were built and used by Eckstein & Company – a incredibly successful mining company.

Designed by the well-known architectural firm of William Leck & Fred Emley, it was one of the first buildings in Johannesburg to be built using a steel structure, that was designed in, and imported from New York. This trend was so cutting edge that it was used in Johannesburg before London!

Local stone cladding from Warmbaths (Bela-Bela) was used to cover the walls, as can be seen on the facade. Just to add some flair, a whole column of bay windows, as well as the top dome on the Commissioner street façade was sheathed in copper. A clear indication of the wealth and opulence of the post South African War era.

The façade mostly consists early Edwardian features but boasts some Victorian touches like the bay windows as well as the central dome. Features that was more widely used a decade before.

Corner House has 493 windows – a great improvement from the first Corner House, that only had 6.

The building was a sight to behold in 1904. It was the first skyscraper in Jozitown – 9 stories, towering 38m above the pavement. People from all over town flocked to see this marvelous building.

If the outside is not impressive enough; The inside had advanced, new technology – in 1904 terms.

It had 5 elevators – considered the first in the city. Transporting goods and people from the basement to the top floors. There are 9 floors, each floor equipped with a strong room, on the first 2 floors it is also steel lined.

Every room in the building had electric lighting as well as cloakrooms with a waterborne sewage system – a miracle in 1904. Marble staircases lined with green tiles, teak parquet floors and wall inlays completed the phenomenal esthetics.

Exceptional in every way, even the basement of Corner House is worthy of a paragraph.

The basement has 6 six fireproof strong rooms, presumably to house gold ingots. There was an electric power plant to generate the electricity needed to operate the 5 lifts as well as the emergency water supply. To ensure that enough water was available for the sewage system, a borehole was dug in the basement.

At the time of completion, the building housed Mr. H. Eckstein &Co, Braamfontein Estates, Grott&Shery stationers along with National Bank of South Africa.

In 1963 a new, bigger Corner House was commissioned and occupied in 1965. The third Corner House was sold to Barclays. At present it is owned by Urban Ocean developers and consists of offices and apartments.

Corner House is still a landmark in the city. It is a beacon of the era when Johannesburg left behind the shanty mining camp days and became “The New York of the Veld” 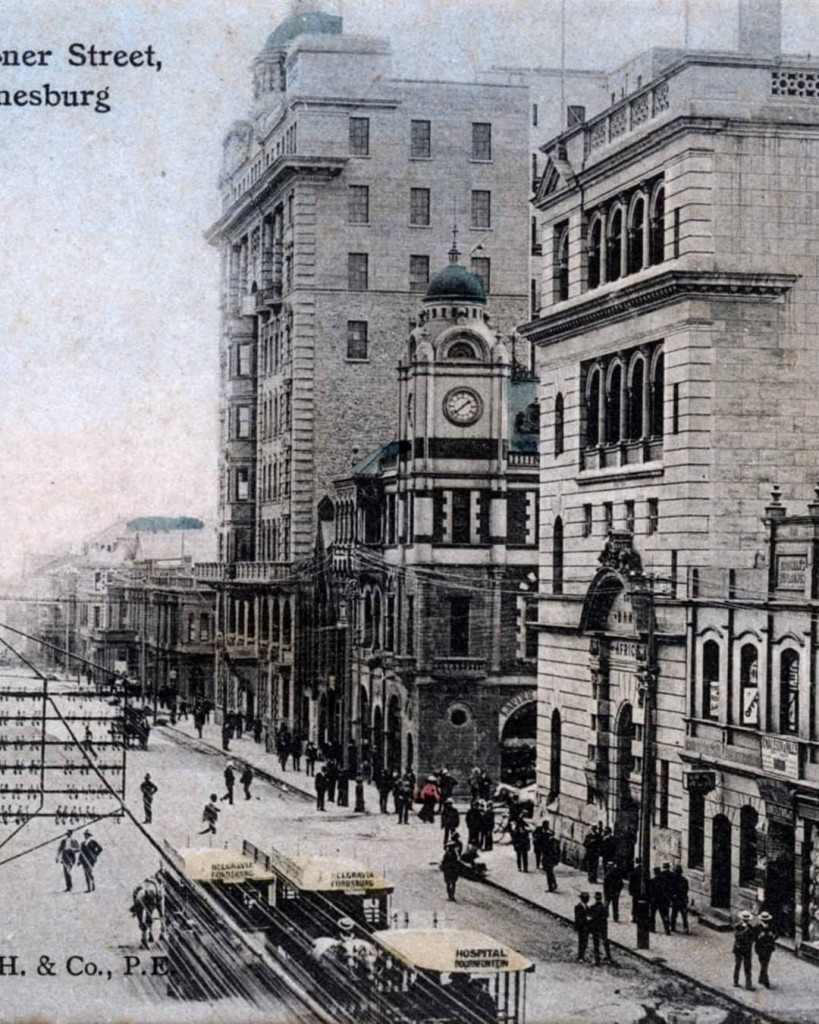