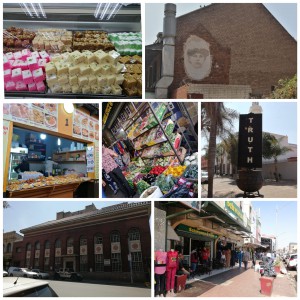 Fordsburg was one of the first suburbs to be surveyed to the immediate west of Town, also known as the “working class west”

It’s proximity to the mines made it the perfect suburb for the miners to live, it has been a diverse community from the outset and is one of the most diverse areas in the city today.The area is now known for the amazing immigrant food culture

The golden city’s history runs like a golden thread through the history of Fordsburg, it is a microcosm of the greater history of the Witwatersrand.

We set out on short history walk, exploring everything from Ghandi to Gundelfinger to Great Grandmother to the Great armed Revolt of 1922.

Fordsburg has exceptional street art, that we marvel at, en route.

Around 12-Noon we hit the many shops and eateries in Mint Road! This street is a fantastic attack on the senses.

In one block you will find Turkish, Pakistani, Greek, Syrian and South-Indian cuisine.

Dosa hut, not only for Dosa’s but also South Indian food, brilliant to take home.

Shalimar delights for all your sweetmeats requirements.

And little Istanbul for the best kebabs in Joburg.

With full bellies and shopping bags we head back to the cars!